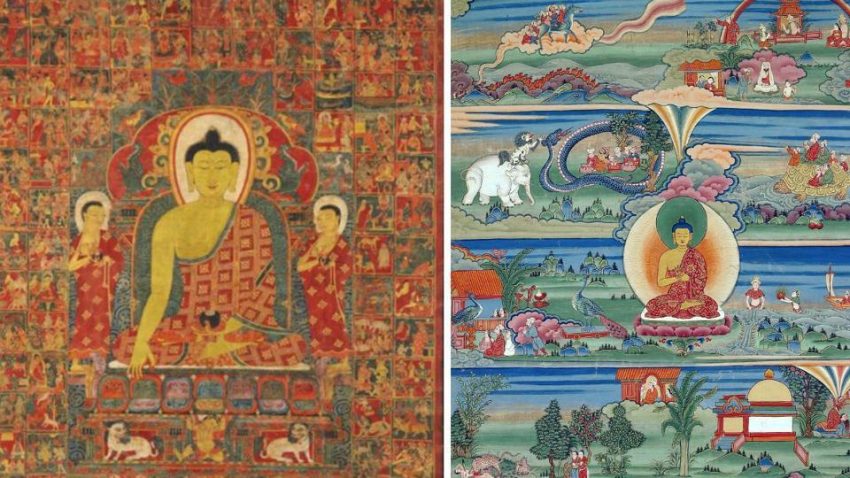 There are many historical records and modern archaeological studies available to study who was this person, we know as Buddha (Siddhartha Gautama).

Buddhism started with the Buddha. The word ‘Buddha’ is a title, which means ‘one who is awake’ — in the sense of having ‘woken up to reality’. The Buddha was born as Siddhartha Gautama in a village located on a border between India and Nepal around 583 BC. He did not claim to be a god or a prophet. He was a human being who became Enlightened, understanding life in the deepest way possible.

Reliable factual data on the life of Siddhartha Gautama is very scarce. His historical biography can be, to some extent, pieced together by comparing early Buddhist texts from different traditions. These accounts are filled with myth and legendary stories that slowly but surely changed the initial attributes of the biography of the Buddha. The final form of these texts were written down many centuries after the death of the Buddha. The true words and accounts of the Buddha were merged with legendary additions from oral traditions. Moreover, it seems obvious that the editors of the final versions of the many biographies of the Buddha made their own additions and shaped the contents of the texts according to their own interests in order to support their own philosophical and religious ideas.

Siddhartha belonged to the Sahkya clan and was born in the Gautama family. Because of this, he became to be known as Shakyamuni “sage of the Shakya clan”, which is the most common name used in the Mahayana literature to refer to the Buddha. His father was named Suddhodana and his mother, Maya.

The Shakya state was located at at the foot of the Himalayas and Siddharta’s family was based in a city called Kapilavastu. Suddhodana was married to Maya and he also had (at least) a second wife, Mahaprajapati, who was Maya’s younger sister. It is probable that Suddhodana also had some concubines. It is believed that Siddhartha was born in Lumbini, present day Nepal, not far from Kapilavastu. Lumbini has been identified thanks to the Indian Emperor Ashoka, who visited the area in 248 BCE and erected a pillar with an inscription commemorating the birth of Siddhartha.

Maya died soon after Siddhartha was born, perhaps within days; the child was raised by Mahaprajapati (Maya’s sister). He was trained in the arts of war and politics, religion and leadership. He was surrounded with all the pleasures the kingdom could offer. He was married during his teens, sometime between the ages of sixteen and eighteen, as was and often still is the custom in his society.

Records don’t tell us whether Siddhartha and Yasodarah had any daughters but eventually they produced a son, Rahula. There may have been males born to Siddhartha’s secondary wives or concubines, but they have not been recorded (as was the custom).

It is believed that the young prince, Siddhartha, was shielded from anything unpleasant throughout his childhood. However, upon being taken outside the palace walls by permission  of his father on a state visit he became aware of human suffering—poverty, illness, anger, greed and the real facts of death. He encountered a monk who explained the possibility of a contemplative life to him.

It helps to know something of the customs of Indian society at the time to understand Siddhartha’s actions at this stage. In Siddhartha’s caste, once an heir had been produced and survived childhood (as Rahula had done in this case) the parents (usually the father) were free to pursue their search for understanding. One duty remained: dependants had to be provided for. But these dependants had to be willing to let the seeker go. Often husbands and wives set off together on their quest.

At the age of twenty-nine, saturated with the good life, Siddhartha set out on his own search. He became a samanara (a forest dweller), a seeker after the reasons for human suffering and the way out of such suffering.

Some Western interpretations of this part of Siddhartha Gautama’s story tell a harrowing tale of his abandoning his loving young wife and his newborn baby in the dead of night to go on his quest for understanding and truth. Had this been so, the Buddha would never have commanded love and respect from not only his clan and his wife but other as well. There was nothing unusual in what he did, if one considers the customs of the rime.

He became very adept at meditation under various teachers, and then took up ascetic practices. This was based on the belief that one could free the spirit by denying the flesh. He practised austerities so determinedly that he almost starved to death. But he still hadn’t solved the mystery of life and death. True understanding seemed as far away as ever. So he abandoned this way and looked into his own heart and mind; he decided to trust his intuition and learn from direct experience. He sat down beneath a pipal tree and vowed to stay there until he’d gained Enlightenment. After 40 days, on the full moon in May, Siddhartha finally attained ultimate Freedom.

Until his death at just over eighty years of age Siddhartha did his best to reveal to those wishing to learn, the mental and physical discoveries that led to his Enlightenment; his coming to understand suffer-ing (the cause of suffering and the way out of it). His followers from every walk of life became so numerous that rules became necessary, as is still the case where many people live together. After Siddhartha’s death great monasteries, which were universities of philo-sophy, arose and many fine scholars emerged to give their interpretations of the Dharma.

Although the Buddha told his very first ‘disciples’ to travel, they went as far as Libya, they did not do what we understand as missionary work. They were to speak only to those who wanted to listen or those who were seeking philosophical knowledge. This remains Buddhist practice – no knocking on doors, no propaganda of any kind. The seeker finds the teacher, not the other way around. In Buddhism the teaching is the important thing, not the teacher.

The Buddha’s final injunction was that out of respect for him believe nothing he said but investigate, investigate for yourself. We can all do that.

# The above excerpt has been taken from the Book “The Naked Buddha Speaks“, https://www.ancient.eu/Siddhartha_Gautama/ and various other online sources.